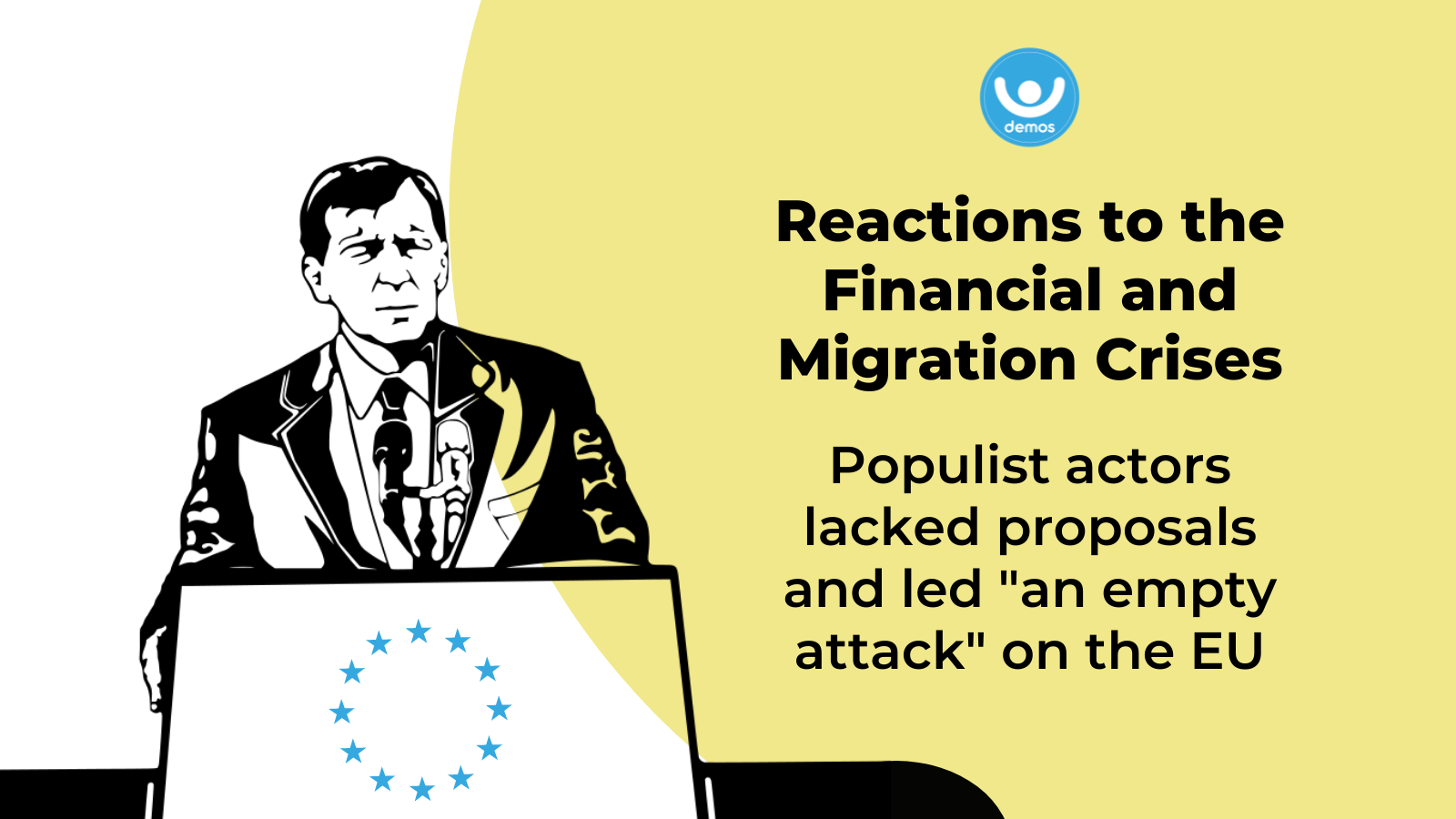 Budapest, September 2—New DEMOS H2020 studies, released today and available for free download below, reveal how populism exploited the migration crisis of 2015 to build strong political support in several European countries. Yet, populist MEPs struggled to influence EU policy and most of their amendments to EU’s migration proposals were turned down in the bloc’s Parliament.

Right-wing populist leaders and politicians in seven European countries took a firm stance against refugees and the EU in 2015. One of those studies shows how their views clashed with policy responses proposed by centrist and left-wing parties, which favoured more moderate policies towards asylum seekers coming to Europe from the Middle East and North Africa.

Lukasz Gruszczynski and Réka Friedery (Centre for Social Sciences, Budapest), who led this research, explain that the migration crisis allowed populist forces to exploit the division between the ‘pure people’ and the ‘elites’. Populists claimed that the EU and opposing governments were trying to re-engineer the Christian and national fabrics of Europe by welcoming migrants, portrayed by populism as a security threat to culture and society – even in countries seeing only a few numbers of asylum requests, such as Slovakia and Poland.

“How important an issue is for society may depend more on how the media covers such topics and how political parties politicise the debates,” Friedery says.

Right-wing populist rhetoric, based mostly on people’s fears and prejudices, worked: society believed in the narratives and supported populist parties in Denmark, Hungary, Poland, Slovakia, and France. A hot topic, the rhetoric also nudged mainstream political parties to take on populist ideas in Denmark, Italy, and France. In most of the seven countries analysed by the research, migration rules ended up stricter or bypassed states’ obligation to provide migrants with access to basic rights under EU and international law.

Despite its success at home, in the European Parliament populist MEPs failed to push their agenda and shape the bloc’s response to the migration crisis: most populist policy ideas were rejected by committees and were not voted by the plenary. Moderate populist parties in the centre and left had more success because of a moderate or open approach to migration. That is the key takeaway of a new DEMOS H2020 working paper examining three legislative processes about migration in the European Parliament between 2014-2019.

The research found that populist parties failed to have their amendments approved by the plenary, no matter the political groups they belonged to. One reason is that radical right-wing parties, including populist ones, were more likely to support policies undermining migrants’ human rights or access to protection, pillars of EU values and law.

DEMOS also releases today a study that looked into the connections between the 2008 financial crisis in Europe and the spread of populism in Europe. The goal was to see how populist forces shaped the European Parliament’s work in a time of crisis. During the 7th term of the European Parliament (2009-2014), MEPs voted measure reforms to contain the fiscal crisis. These were known as Six-Pack, the Two-pack, and Fiscal Compact.

According to the research, populist actors claimed the EU did not respect member states’ sovereignty or the ‘peoples’ will’ – a strategy that populist parties would later repeat in the migration crisis in 2015.

“The emotional populist arguments frequently resorted to historic parallels, which could depict the EU or its institutions as working similarly to the Soviet Union or the Nazi dictatorship,” Balázs Horváthy and Viktor Szép (Centre for Social Sciences, Budapest), who led this research, write.

In terms of policy, the populist approach lacked not only substance but also compromise with other political groups. “As populism goes hand in hand with Eurosceptic sentiment, we found that their most important goal was to lead an empty attack not only on the proposals but also on EU institutions and the integration project,” Horváthy says. “But their reasoning frequently falls into logical fallacy; the analysis shows that the populist argumentation is mostly based on slippery slopes.”