Government-friendly judges is yellow warning for rule of law 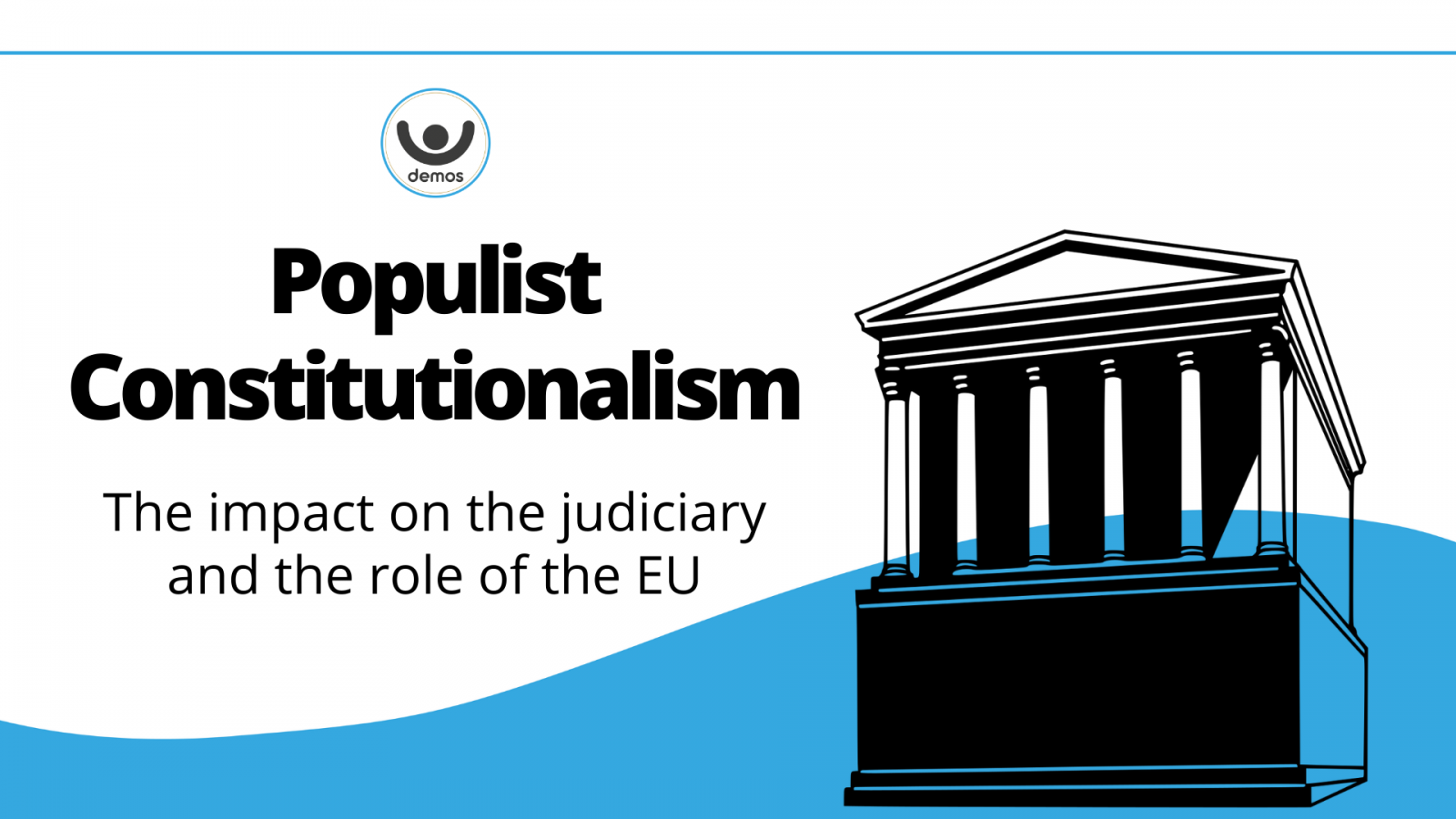 Budapest, December 2—Populist leaders often try to change democratic institutions to affirm the primacy of the people’s will, or so they say. A new DEMOS research claims that those changes have only loosened constraints on their power.

The conclusion stems from an extensive research that investigated the clash between populism, counter-majoritarian institutions, and EU law and values in European countries, particularly in Hungary, Poland, Czechia, and Slovakia.

Results cast light on populist constitutionalism and judicial populism — and open pathways for policies to remedy their impact such as democratic backsliding.

The research teams at the University of Barcelona, Centre for Social Sciences in Budapest (CSS), and the University of Copenhagen, authors of the analysis, explain that populist leaders have shown an appetite for constitutional and legal reform with the solo aim of consolidating their power.

The research moves from the assumption that populist constitutionalism in Hungary and Poland has been an overreaction to the legal reforms adopted in Eastern Europe after communism. To move towards EU membership, these countries were encouraged to fully adopt European standards on democracy, without considering the peculiarly of each legal culture.

Populist leaders have now been reforming their legal environment. They claim their reforms aim at balancing out democratic powers by promoting the popular will. The problem identified by the research is that populist leaders take the popular will they claim to embody as the only legitimate authority to follow. And “such a claim results in states not fully governed by the rule of law,” professor Josep Castellà Andreu (University of Barcelona), who led the DEMOS research, says.

Stronger populist control over the judiciary may result in less political freedom. Without independence and powers to effectively carry out their mandates, judges can do little to safeguard individual rights and oversee government’s actions. “This has happened in Hungary and Poland, where the constitutional courts have been captured by the ruling majority,” the authors report. Both countries weakened the judiciary by trying to lower the retirement age for judges, and by appointing government-friendly chiefs to lead judicial institutions. Spain has been observed for the entirely parliamentary appointment of its Judicial Council and the current proposal to reduce the qualified majority needed for those appointments.

Ensuring the participation of judges and other actors in decision-making processes – from the appointment of judges to constitutional revision — may help counter populist influences. Czechia follows that model, and has better resisted the populist wave rolling in from its right-wing, populist-led neighbouring countries.

POPULISM IN THE COURTS

The populist influence in courts is another challenge. The research claims that judicial populism can assume different shapes. Not all of those are necessarily bad. When a judge believes he has to consider the public opinion in his decisions, this does not necessarily mean his judgment will lack legal standards.

“But another thing is strategic populism in the courts, when judges accommodate the interests of the ruling majority to the detriment of others,” says legal scholar Fruzsina Gárdos-Orosz, from the Centre for Social Sciences in Budapest, regarding what has happened in Hungary since the Fidesz party came to power in 2010.

According to the research, a way out of populist influence involves bringing citizens into the administration of justice. This would give the judiciary more legitimacy and popular input, all without affecting the standards of legal reasoning.

In Europe, the EU plays a key role in safeguarding that Member States abide by its values and laws. The common effort of the European Commission and the EU Court of Justice in using infringement proceedings has been the most effective legal tool to protect the judiciary.

Article 258 TFEU allows the Commission to overcome the political deadlock involved in using Article 7 TEU. Triggered against Poland in December last year, and Hungary in 2018, the use of Article 7 can lead to the suspension of a state's voting rights. But, since sanctioning a Member State requires unanimity, the chances of succeeding are thin.

The project researchers are working on policy options to constrain the negative impacts of populism, including through law. From the EU’s perspective, it is vital to limit the rise of populist forces by strengthening national democratic institutions and, in particular, an independent judiciary. It will not be easy to respond to populist constitutionalism. But the alternative is to feed a rule of law crisis.