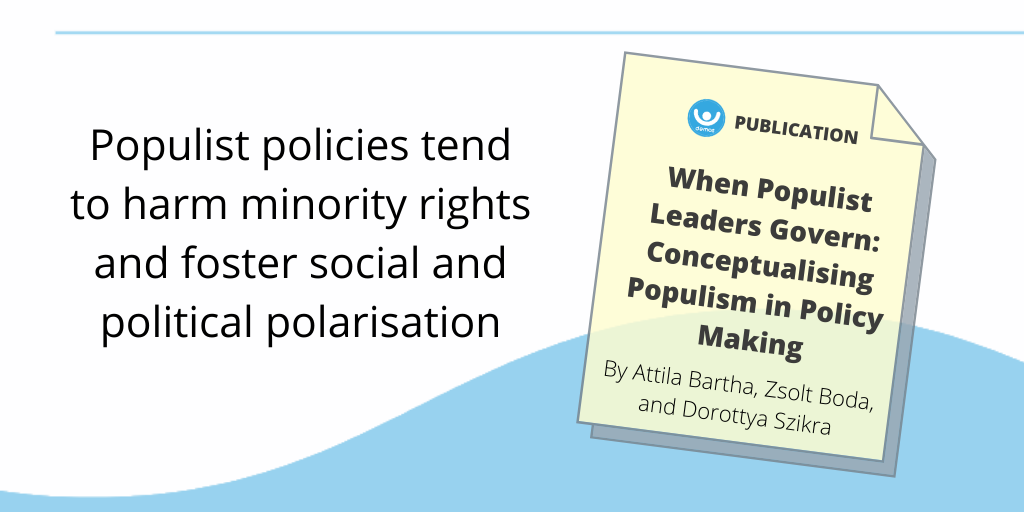 Budapest, July 28—The rise of populist governments, particularly in Eastern Europe, has offered an opportunity for academia to study how populist leaders make policy. In a study released today, DEMOS proposes that populist policy making might be successful because of its “chameleonic” features, even if it leads to negative outcomes. Populist policies draw from many ideologies and reflect the preference of majorities, but are usually harmful to minority rights. Often, they are unpredictable and promote radical, fast-paced changes. As a result, what is left is a tendency to divide society, downplay the rule of law, and oppose conventional policy making as established in liberal democracies.

By disentangling the relationship between populism and policy making, the study casts light on an unstudied aspect of populism. According to the authors Attila Bartha, Zsolt Boda, and Dorottya Szikra, from the Centre for Social Sciences, which coordinates DEMOS, knowing more about the theme has also practical policy implications. “Foremost, it helps us explain how and why populists survive in power even in the longer run,” Bartha says. “Reasons for success of populist governance might include how flexible they are in adopting policies and also how closely they follow majoritarian preferences of the electorate.”

More than analysing the content of populist policies, the authors also discuss how they emerge and how populist leaders speak about them to thrive. Populist governments usually disregard the role of institutions in the policy process. They also limit conventional policy expertise, the opposition parties, and civil society’s opinions. Instead, they establish a direct communication with the electorate. The tone of the message is emotional and refers to crisis and “enemies” of society in order to garner public support. As a result, the authors pinpoint that the entire policy process harms minority rights, weakens the rule of law, and fosters social and political polarisation. “The entire process leads to the decline of participatory democracy and decreases the quality of policy making,” Bartha explains.

That has been the case in Hungary since Prime Minister Viktor Orbán came to power in 2010, making the country the first populist administration in the European Union. The authors analysed social policy in Hungary against their suggested framework of populist policy making and found a match in most features. Orbán’s social policy reforms took diverse ideological directions, bypassed conventional policy processes, and have been adopted at top speed with limited input from policy actors and opposition parties.

An example is how Hungary has launched and adopted its “working families” policies. Some of those reforms eventually benefited upper-middle-class families the most. Despite policy experts’ criticism that the ideas would increase social inequalities, the populist approach drew acceptance and support from society; poor families remained poor, but could make a somewhat better living.

The study casts light on policy making with a right-wing populist case only. But it offers an important framework through which researchers can further study populist policies in different contexts. And it opens a pathway for policies that might remedy the negative manifestations of populism.