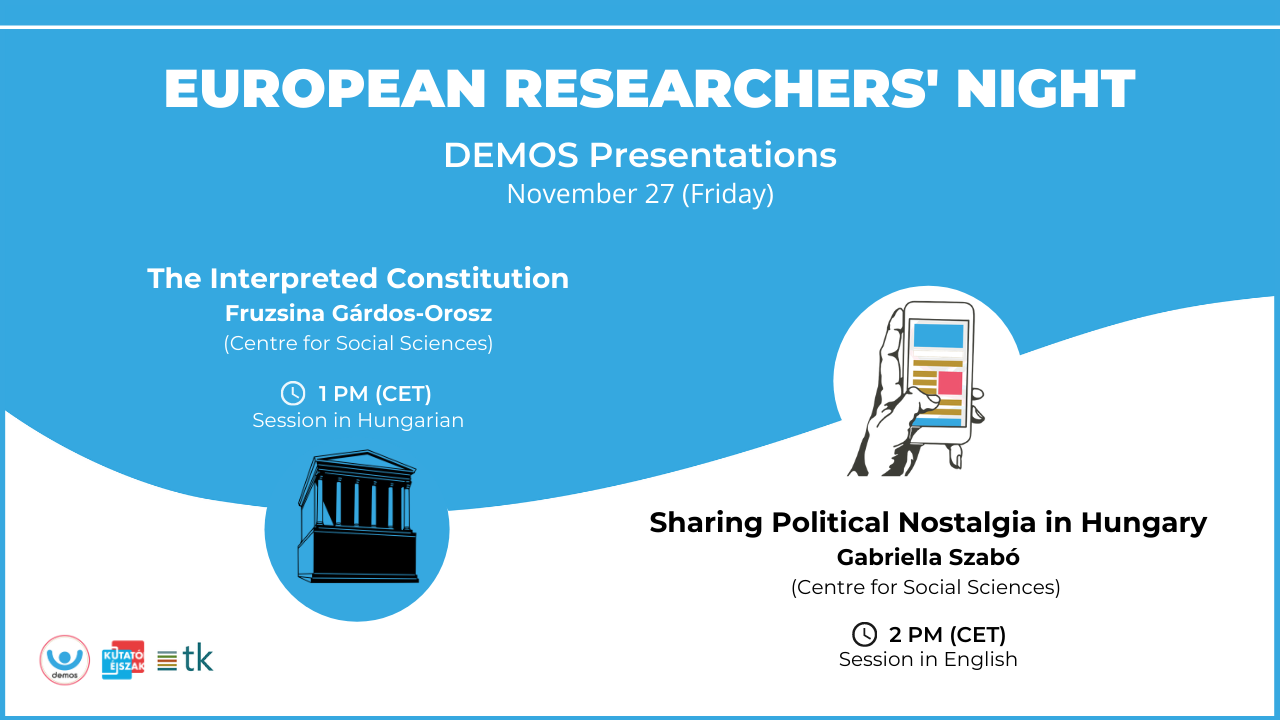 DEMOS team members Fruzsina Gárdos-Orosz and Gabriella Szabó, from the Centre for Social Sciences, Budapest (CSS), will present project results at the European Researchers’ Night, an EU-funded event aiming at bringing researchers closer to the public. The sessions are co-organised by the Centre for Social Sciences in Budapest, which coordinates DEMOS. Both presentations will be streamed live on Zoom application on November 27. (Read the agenda and watch a video, in Hungarian, below).

Fruzsina Gárdos-Orosz, director of the Institute for Legal Studies at CSS, will be presenting on the link between populism and methods of constitutional interpretation in countries such as Spain, Greece, Poland, and the UK. “I will discuss how these countries’ constitutional courts have been reacting to populist challenges and how difficult it is to make judicial decisions in politically sensitive cases,” she says. Her findings on populism and constitutional interpretation in Europe and other countries will appear in a forthcoming book edited with Zoltán Szente, a research chair at CSS. Gárdos-Orosz’ session will be held at 1 PM (CET) in Hungarian language.

In an English session at 2 PM (CET), Szabó, a researcher at the Institute for Political Science at CSS, will explore the patterns of political nostalgia in politicians’ communication on Facebook. Using posts of Hungarian politicians who ran for European parliamentary seats in 2019, Szabó found that right-leaning political leaders expressed nostalgia in their posts more often than left-leaning counterparts. Nostalgic messages are ineffective in amassing users’ reactions. “The results mitigate some concerns about the influence of political nostalgia in Hungary,” Szabó says.

DEMOS at the European Researchers’ Night

Watch the video about the Researchers' Night below (Hungarian Language):